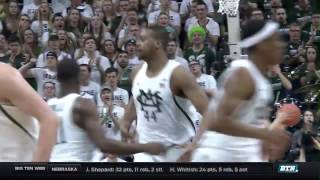 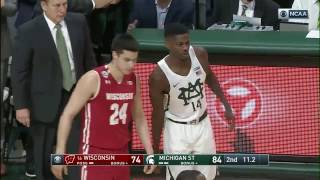 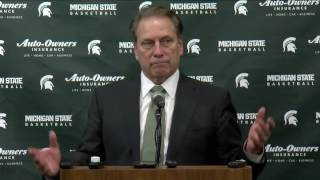 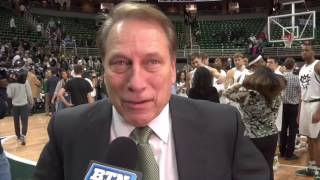 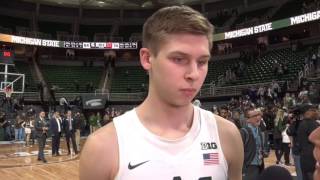 Michigan State tops No. 16 Wisconsin, takes a long step toward securing NCAA Tournament bid MLive
Michigan State played its final 2016-17 game at Breslin Center on Sunday. The lasting impression is: When they’re good, the Spartans can be really good. When they’re off, they can be self-destructive. Either way, it’s always interesting to watch.

Michigan State beefs up résumé with 84-74 win over Wisconsin Detroit Free Press
Michigan State needed to steal at least one of its final four games to make a stronger case for an NCAA tournament berth. So far, the Spartans are 2-for-2. And they did it with a variety of contributions.

MSU upsets No. 16 Wisconsin on senior day, 84-74 State News
It was a showcase of underclassmen talent at the Breslin Center Sunday, as the Spartans hosted the University of Wisconsin for senior day. MSU upset the No. 16 Badgers by a final score of 84-74.

MSU notches resume-building win over Wisconsin Detroit News
Michigan State doesn’t have a lot of seniors, so it was fitting in the final home game of the season – on Senior Day – that it was once again the youngsters that led the way. Nick Ward and Miles Bridges – the two freshmen who have produced all season – were the catalysts again Sunday as Ward scored 22 and grabbed nine rebounds while Bridges added 17 points and seven rebounds as Michigan State beat No. 16 Wisconsin, 84-74.

Three Takeaways: Spartans Win A Big One On Senior Day, beat Wisconsin 84-74 The Only Colors
In beating Wisconsin, the Spartans were able to finally add that elusive marquee win to their resume and all but lock up a trip to the NCAA Tournament. There are still games to be played, but this was a huge opportunity and they made the most of it.

Nick Ward-Led Michigan State beats No. 16 Wisconsin 84-74 MSUSpartans.com
Nick Ward had 22 points and nine rebounds, Miles Bridges had 17 points and Matt McQuaid added a season-high 15 to help Michigan State beat No. 16 Wisconsin 84-74 on Sunday. The Spartans (18-11, 10-6 Big Ten) have won six of their last eight games, moving them into a third-place tie in the conference and perhaps sealing their spot in a 20th straight NCAA Tournament